Xbox Gamertag Generator: The Xbox is an excellent platform to play epic and exciting games. Who hates to play Xbox games? We know. Everyone loves it! Microsoft’s popular platform allows you to sit, relax, and enjoy a good time.

If you are a frequent Xbox player or an Xbox lover, you know about Xbox GamerTag. A Gamertag is your alter ego in the Xbox world. It’s made from an alias, an optional avatar or an image. It is nothing but a tag that represents you when you’re playing games and sharing with other people in the Xbox community. 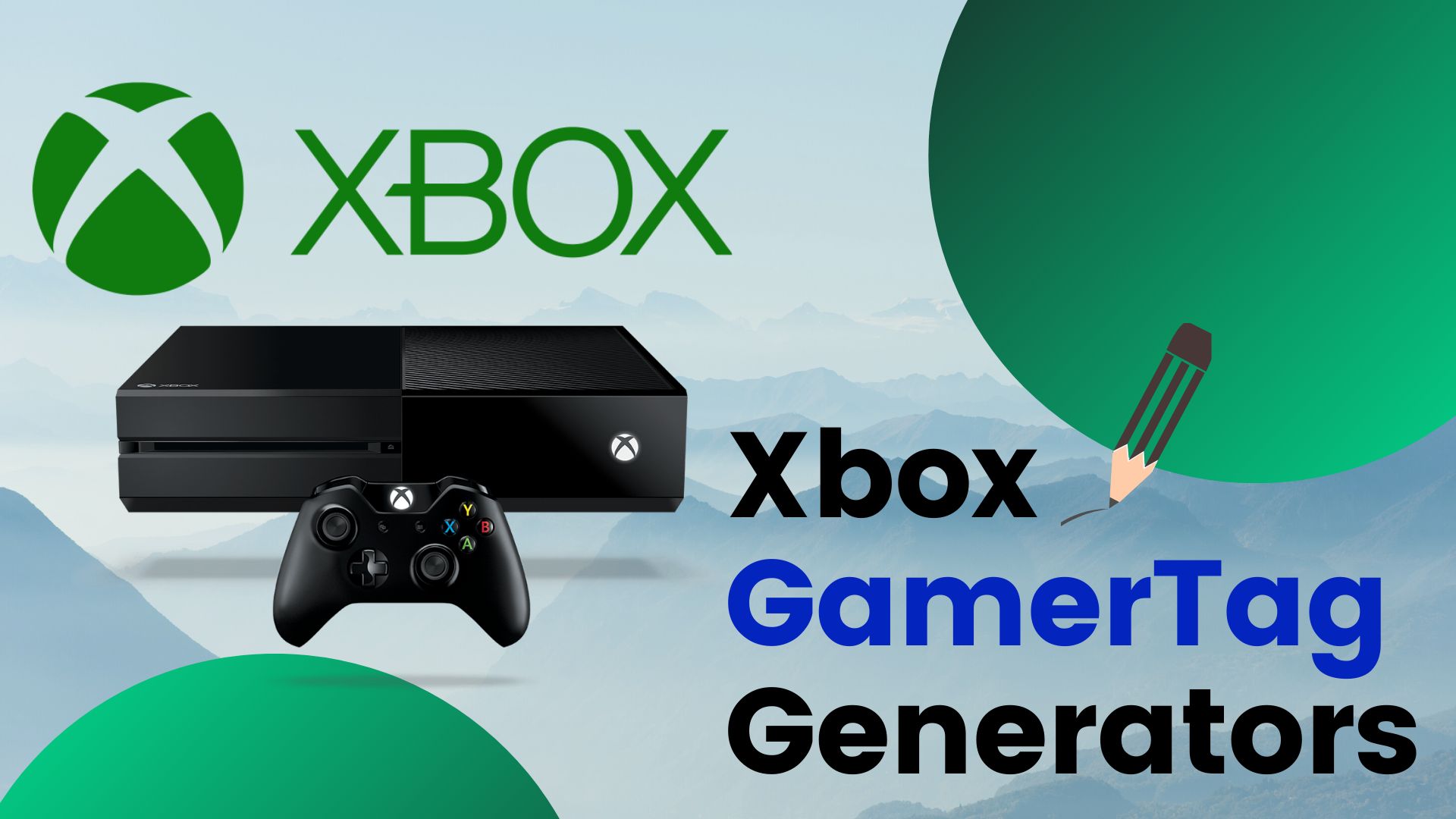 As you know, cool names on the Xbox platform will make it easier for you to get attention. So, if you are looking for the best Xbox GamerTags for you, then you landed on a perfect page. Thousands of free Xbox GamerTag generator tools available on the internet. These free username generator tools let you make many customized name ideas.

Alongside the personalized usernames, these Xbox Gamertag generators will help you create hundreds of Xbox Gamertags based on your name, pet name, or any other words you entered.

You can use these Xbox Gamertag generators unlimited times for free as you like to create a new set of random names. If the generated name is already taken or not available then you even have the option of adding some variations, like extra characters, prefixes, or suffixes. Moreover, you can also try using partial words – strip 1 or 2 characters from the end or start or replace letters with similar words.

However, these Xbox name generator will surely give you an idea to create a unique Xbox Gamertag. As we mentioned earlier, just make some variations to create an Xbox Gamertag with these Gamertag creator sites.

To change your Xbox Gamertag, open the Xbox app, select Menu, tap on your gamerpic, then choose Customize > Change Gamertag.

CoolGenerator Xbox Gamertag generator is the first Xbox name generator tool on our list. This is one of the cool Gamertags generators that will help you to create an Xbox Gamertag. 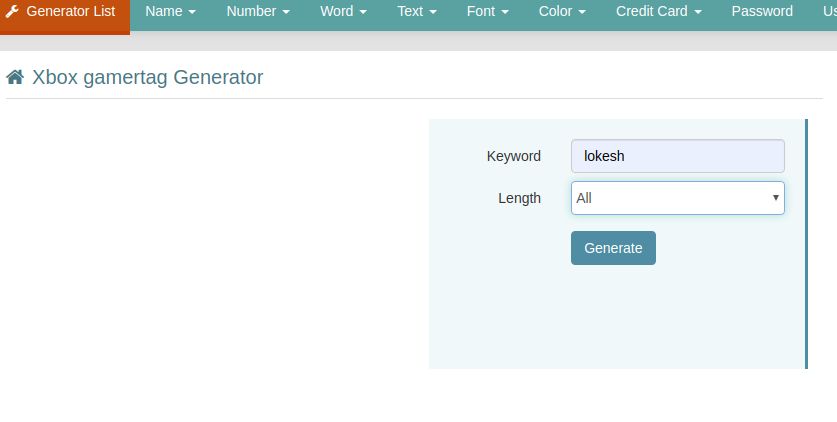 After entering a keyword and selecting the length from the drop-down menu, just tap on the Generate button. Now, the CoolGenerator will create the best Gamertags based on the keyword you entered.

It is one of the most famous and efficient online username generator sites that also offer Xbox Gamertags. With a simple entry of details, this tool gives you more than 25 unique Gamertags in one click.

To create an Xbox Gamertag on Spinxo, you have to fill all the required information like Name or Nickname, your likes, your hobbies, things you like, important words that need to be added on the Gamertag and the numbers or letters. Of course, you can leave any of these tabs empty if you don’t have anything to fill. At last, just click on the SPIN button. In one Spin, Spinxo will generate 30 cool Gamertags for your Xbox. You can also select the keyword suggestions from the bottom of the Spinxo to get more amazing Gamertags. Undoubtedly, Spinxo is the best Xbox username generator you should check out.

Jimpix lets you make your own custom Xbox Gamertag in case you need one. Navigate to the Jimpix username generator website and you’ll see the option to enter the name etc to get the Gamertag based on it. After entering it, select Random Category, Length of the username, Length match, Start letter, and the Word position from the drop-down menu. In the last step, tap on the GO button to submit. 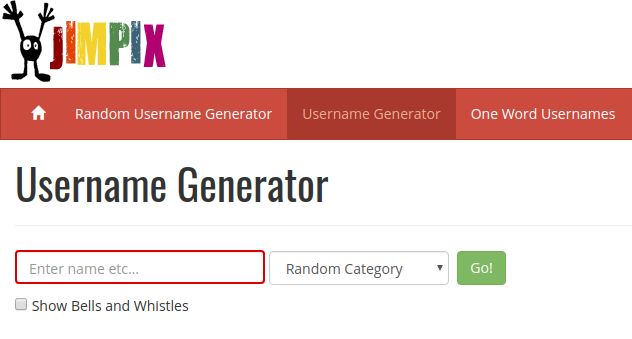 Boom! You have successfully generated cool names Gamertag with a simple website. Further, you can list the generated Xbox Gamertags in alphabetical order and you can even reset them to generate a new one.

All you need to do is select the Filter and click on the Generate Gamertag button. The filter includes Animal, war, space, medieval, fantasy, evil, technology, western, crime, folklore to choose from.

NameGenerator.biz is one of the top random Xbox name generators available on the internet. Name Generator offers thousands of unique and cool looking usernames if you are looking for one. If you are searching for the Xbox Gamertag generator that provides the best Gamertags then this website is for you. 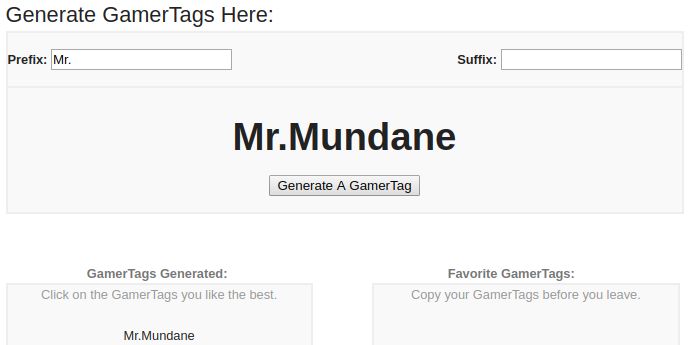 You can add Prefix or Suffix to generate the unique and good Xbox Gamertags. To make Xbox usernames, just add Prefix or suffix and click on the Generate A Gamertag button. This website will provide you the best names for Xbox Gamertag. One more best feature of this Gamertag generator is that it allows you to add the generated Gamertag as the favorite. Just tap on any of your liked Gamertag and it will be included in the Favorite Gamertags list.

One must check Xbox Gamertags available on this site. It won’t be ever this much easier to generate an Xbox Gamertag than this tool. Unfortunately, this Gamertag generator provides random Gamertags. So, unlike other sites, you can’t add your favorite word, suffix or prefix that you need in the Gamertag.

However, this tool gives you the best ideas to create the awesome Xbox names in just one click. If you don’t like the random Xbox Gamertag generated by the site, just click on the Generate Another option. That’s it! As simple as that.

Another great tool using it you can create your Xbox Gamertags for free. This is the best cool names Gamertag generator site you can try today. It’s a little bit different tool from others. Here, you need to select the Genre of the game and after choosing it, click on the Genr8 button. 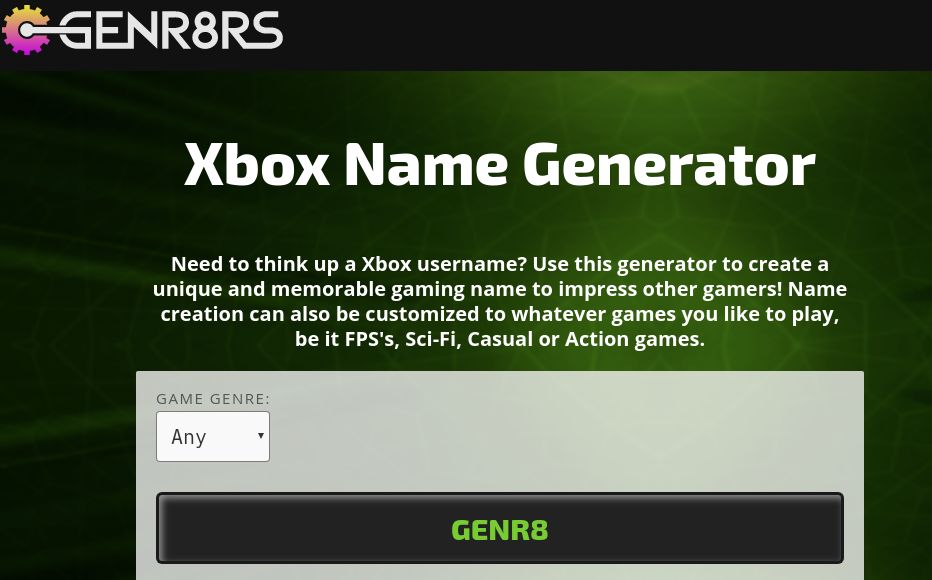 It will produce the best Gamertags. After using this Gamertag name generator, the Xbox Gamertag generated by the site can be sharable on Facebook, Twitter and even you can copy it in one click.

This one is quite a famous Gamertag name generator site that allows you to make unique Xbox Gamertag anytime with a simple click. All you need to do is, just select the minimum and the maximum length of the Gamertag and choose the gender. At last, tap on the Generate button.

Bingo! With one click, it will generate 10 unique Gamertag names. Although this is the random Gamertag generator site that won’t allow you to add anything to the tags, it is worth trying.

Last but not the least, Gamertag generator is the last website on our list. This Xbox name generator tool helps you to generate cool Gamertags for Xbox. Moreover, this site also allows you to check the availability of the provided Gamertag.

To create an Xbox Gamertag on the GetGamertag website, just visit the site and select the type of the Gamertag. Click Generate ____ to get the random Gamertag. You can even customize your Gamertag by adding the name, hobby, nickname, special character, number, etc, To customize the Gamertag, just Tick on the Customize your Gamertag? Option. At last, tap on the Generate Custom GTag button.

Wrapping Up: What is the Top Xbox Random Gamertag Generator?

Selecting the good looking Xbox Gamertag isn’t that easy. You need to have a unique, memorable and cool Gamertag while simultaneously describing what your name or the favorite thing is all about. But even after you’ve come up with cool names Gamertag you may find that Gamertag is already taken. We know, it is quite annoying.